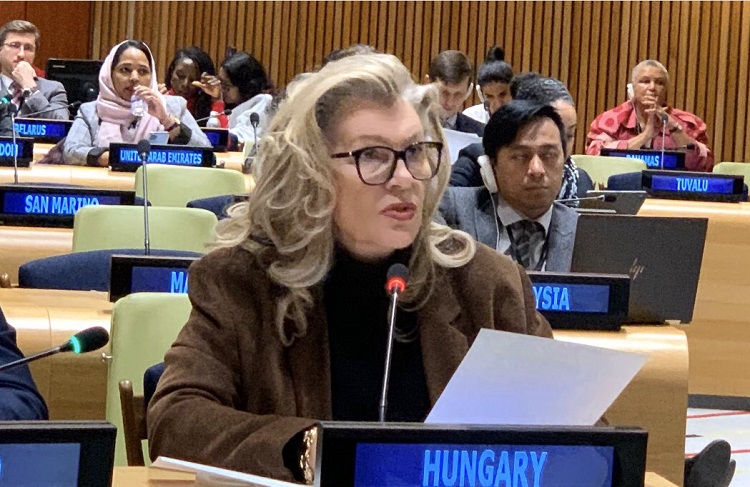 On February 21, 2020, Her Excellency Ambassador Katalin Bogyay, Permanent Representative of Hungary made a national national statement at the first meeting of the intergovernmental negotiations on the Declaration for the Commemoration of the 75th Anniversary of the UN.

The first meeting of the intergovernmental negotiations on the Declaration for the Commemoration of the 75th Anniversary of the UN was chaired by the Permanent Representatives of Qatar and Sweden. H.E. Tijjani Muhammad-Bande President of the General Assmebly made introductory remarks.

In her national statement Ambassador Bogyay highlighted that the year 2020 is of utmost importance not only for the United Nations but for Hungary as well, since it will be the 65th anniversary of our accession to the organization. Throughout more than a half-century, we have been constantly supporting the work of the UN family and we remain committed to the cooperation with the UN and its specialized agencies.

H.E. emphasized that more than ever we need to build trust for multilateral thinking. The 75th Anniversary is a great momentum in the United Nations’ life, it is a unique opportunity to reiterate our collective attachment to the Organization and to multilateralism.

In her conclusion Ambassador Bogyay announced that Hungary will contribute to the Trust Fund established to support the 75th anniversary commemorative events.